Early records report a Wesleyan congregation in Topsham from about 1808 which, in 1811, occupied the site of the old Friends Meeting House (later the town’s First School) in Majorfield Road.  However, through the vision of local worshippers, notably the shipbuilder John Bagwell Holman (1800-63), it was recognised 50 years later that the time was right for a new, larger chapel.  Sanction for the building was given in 1864 by the Wesleyan Chapel Committee and a plot identified on Fore Street in the middle of the town.

Building (by John Periam) was started in 1865 and the new Church was opened on 30 May 1867.  It was designed by the architect F R (Robert) N Haswell of North Shields (but who had local connections) and modelled on the Early English style, with chancel, nave and transepts; note the piscina in the apse of the chancel area as a further example of this unusual ordering for a Methodist chapel.  A small gallery at the rear of the Church completed the interior layout.  A low, dumpy, round stair tower is a distinctive feature of the view of the Church from the road, as is an attractive rose window, now back-lit during the evening.  The building was constructed, at a cost of £3,400, out of grey limestone with red sandstone and Bathstone dressings.

The Church property was developed over the years.  Electricity arrived in 1907 and a Minister’s house acquired in 1910.  More importantly, with the growth of Sunday School activities, an adjacent hall was built in 1908 (due again largely to the generosity of the Holman family), later becoming the base for other Church pursuits such as a Band of Hope and the Boys’ Brigade (and, in World War II, an evacuee school).  In the late 1980s, it became apparent that the Church buildings required a major overhaul, while at the same time the need for such a large set of premises was not what it was.  After much thought it was decided to sell the hall and the adjacent caretaker’s cottage to fund the complete refurbishment of the Church.  This imaginative scheme, designed by Francis Bush of Plymouth, was completed in 1991 at a cost of over £200,000, leaving the Church with a welcoming worship area and a modern set of supporting rooms, all acco 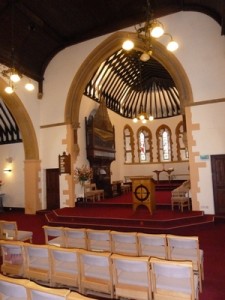 mmodated within the existing building.

The remodelling of the Church allowed the retention of a number of original or long-standing features, including the stained glass.  Visitors will note the interesting scissor-braced rafter roof to the chancel area, the warmth of the wood that still covers the nave (and which used to bow upwards like the interior shape of a boat),  the original front of the gallery retained as a feature on the back wall of the nave, and the main, ornate light fittings.  The heavy, Victorian communion table now sits in the north transept.  The Church possesses a small but attractive 19th century two-manual organ with painted pipes, enlarged in 1900 and completely renovated in 1996 by Michael Farley of Budleigh Salterton.

The Victorian stained glass is more of interest, perhaps, for its associations than its quality, although the windows depicting incidents in the lives of St Andrew and St Paul are picturesque.  The lancet windows in the chancel were designed by Heaton, Butler and Bayne; two commemorate ships and their crews lost at sea, others members of the Holman family.

Before remodelling, the Church also contained a small number of memorials which were subsequently relocated to the south porch where they may still be seen.  Of particular note is that commemorating Captain D G Saunders and the crew of the steamer, Archtor lost with all hands in the North Atlantic in January 1912.